Venous thrombosis, or blood clots, is treated with anticoagulation therapy. Historically the treatment has consisted of Heparin initially, delivered intravenously, or by subcutaneous injection, and then long term treatment with Coumadin (warfarin) an oral anticoagulation tablet. The reason that treatment begins with Heparin, which is delivered into the blood stream, is so that the patient is immediately protected. The Coumadin dosage usually takes several days to reach a protective level in the blood stream. 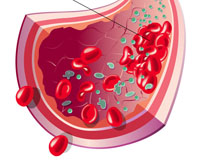 Certain medications may interfere with the adequate levels of Coumadin in your blood system, and certain foods may also interfere with obtaining adequate blood levels. Coumadin counters the effect of vitamin K, which naturally protects us from bleeding when we sustain an 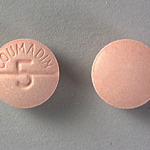 injury. So foods that are rich in vitamin K should be eaten in moderation while on Coumadin. Also, since the Coumadin is detoxified (broken down), in the liver, it would be wise not to drink alcoholic beverages for the duration of time that you are on this medication.

Women who are pregnant, and those who are breast-feeding, should not be using Coumadin, as it will pass through to the fetus, or newborn. This group of patients is being treated with an injectable form of Heparin, as it does not have that issue.

Recently, newer oral anticoagulation medications have been FDA approved, and are currently being used on the market. These medications, give adequate protective anticoagulation therapy, but do not require the blood testing that is required when using Coumadin. You may have seen television advertisements regarding these newer medications, Xarelto, and Eliquis. As with any other medications that are prescribed, please have a discussion with regards to their usage and safety with your healthcare provider.

If you have any questions about venous thrombosis, call the top vein doctor in NYC, Dr. Norman Chideckel.